Missouri KidsFirst successfully advocates at the state and federal levels for policies and funding for programs that protect children from abuse and prioritize their safety and well-being. Each year, we testify in public hearings and engage in meetings with lawmakers and advocacy partners. We are proud to advocate on behalf of Missouri children to improve the way our systems respond to child abuse and neglect. 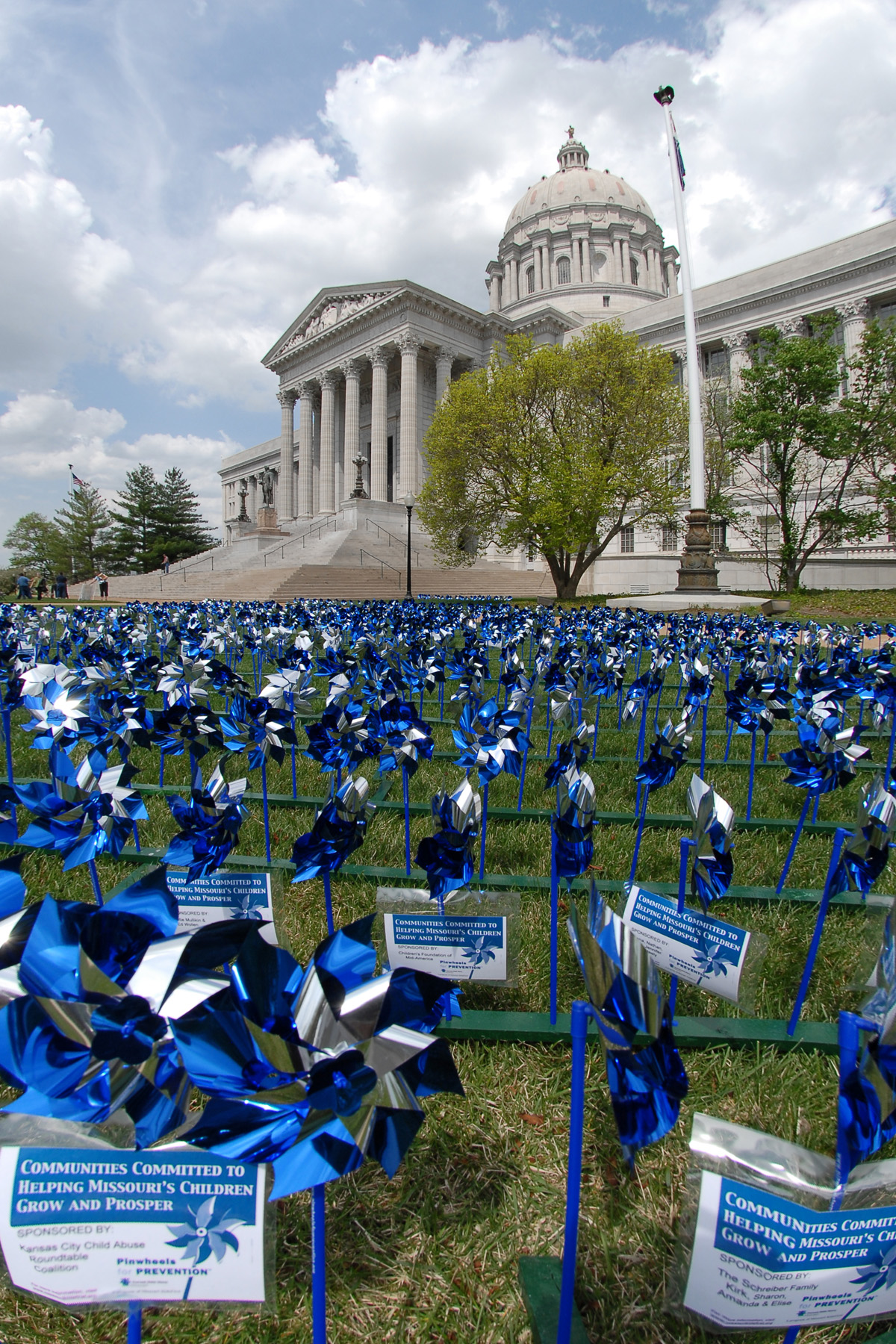 The Second Regular session of the 101st Missouri General Assembly convened on January 5th and concluded on May 13th, with Governor Parson signing bills, including the state’s operating budget, in June and July. While thousands of bills are introduced each year, only 45 non-appropriations bills and resolutions made it over the finish line to the Governor’s desk in 2022.

Below we are excited to share some legislative highlights from 2022 for child protection and safety in Missouri. Be sure and follow us on social media for real-time advocacy updates!

A significant part of our work each session is to support funding for agencies and programs that serve children who have been victims of abuse and neglect and that work to prevent child abuse. This year, the Missouri General Assembly passed a historic $49 billion budget. This record setting sum is due to the influx of federal funds from COVID-related stimulus packages. House Bill 3020 allocated nearly $3 billion in American Relief Plan Act (ARPA) state fiscal recovery funds including projects for public institutions of higher education and broadband infrastructure.

While much of the attention focused on allocating the federal dollars, the state’s operating budget contained a number of significant funding items. This year, we are thrilled to share that Missouri KidsFirst secured an increase to the state funding (general revenue) line-item for child advocacy centers (CACs), the first increase since 2015. Beginning FY 2023 (July 1, 2022-June 30, 2022) CACs will receive approximately $3.5 million/year, an increase of 20%. This funding is allocated to CACs by formula based on population and county share. For more information on state funding for CACs, check out our 2022 advocacy handout and our estimated breakdown of this funding by Center.

The SAFE-CARE (Sexual Assault Forensic Examination-Child Abuse Resource and Education) program, administered by DHSS in partnership with Missouri KidsFirst, develops and maintains a coordinated medical response to child abuse and neglect in Missouri. DHSS funding supports training, mentorship and ongoing education for medical providers on the forensic evaluation and comprehensive medical care of children who may have suffered physical or sexual abuse. This program also supports a regionalized medical response to child abuse, including providing triage and medical review of cases of children three and under referred by the Children’s Division and leading medical forensics trainings to providers and multi-disciplinary team members. The regionalized response is coordinated by Missouri KidsFirst and is a collaboration among DSS, DHSS and Missouri’s three Child Abuse Resource Centers (St. Louis Children’s Hospital, Children’s Mercy Hospital and Cardinal Glennon Children’s Hospital). Child abuse pediatricians at the Resource Centers review almost 5,000 cases each year using the triage system. Level funded in SFY2023.

Department of Public Safety—Office of the Director–State Services to Victims Fund (8.035)

The Crime Victims’ Compensation (CVC) Program provides financial assistance to victims who have suffered physical harm as a result of violent crime. For victims of child sexual abuse in Missouri, appropriate medical providers bill the Sexual Assault Forensic Examination (SAFE) Program within the CVC Program for the charges incurred in collecting evidence during the forensic examination. Additionally, the CVC Program makes payments to medical providers who provide forensic examinations of persons under eighteen years of age who are alleged victims of physical abuse. Both programs ensure that victims are given access to examinations at no cost. For SFY2023, $12.9 million in federal and state funding and crime fines including an increase of $200,000 for reimbursement for child physical abuse exams, an increase of $500,000 in spending authority for SAFE program and $600,000 in federal authority for the CVC

In the final days of session, lawmakers passed SB 681, sponsored by Senator O’Laughlin (R-Shelbina) an education omnibus loaded with programs and reforms for K-12 education. Included in the bill was the removal of out-of-date language (originally in HB 2095, sponsored by Representative Hannah Kelly) related to investigations of child abuse (other than sexual abuse) perpetrated by school personnel. Under the former law, public schools, not Children’s Division, were authorized to investigate themselves in these cases, giving the school has the first say in protecting their employees. The General Assembly has made great progress on this issue since 2011, passing several measures to improve the way our systems respond to cases of abuse in schools, including changes to our mandated reporting laws and the “pass the trash” bill in 2019. But loopholes and gaps in our laws still exist and this was one of them. Passage of this language improves our laws to help ensure that schools are not institutions that cover up child abuse but instead protect children.

The act also now requires school districts to notify parents and receive written permission before using corporal punishment. While many states have banned the practice, Missouri is one of 19 states still allowing for corporal punishment in public schools from preschool through 12th grade. Missouri KidsFirst believes that physical punishment – an adult’s use of physical force (e.g., corporal punishment, spanking, paddling) to punish a child or correct a child’s inappropriate behavior – increases aggression in young children and is ineffective in teaching a child responsibility and self-control. Further, evidence suggests that corporal punishment may cause further harm to the child by affecting healthy brain development. We advocate for a prohibition on the use of corporal punishment in schools and believe that the changes included into law this year will reduce this practice and move Missouri closer to its full elimination.

Lawmakers also passed SB 775 (Senators Thompson Rehder and Schupp), an omnibus making a number of changes to the judicial process, specifically in regard to cases of sexual assault and child trafficking, designed to improve protections for survivors. HB 2032, a Missouri KidsFirst priority sponsored by Representative Ed Lewis, was included in the final package. The new law would protect victims of child trafficking by removing the need for minors arrested for prostitution to show coercion for them to be immune from prosecution. This will help to ensure that our laws treat victims of child sex trafficking as such. The law also establishes the Statewide Council on Sex Trafficking and Sexual Exploitation of Children. Along with legislators and state agency leadership, Missouri KidsFirst, the Missouri Coalition Against Domestic and Sexual Violence and service providers will serve on the Council which will collect data related to the sex trafficking of children, review best practices regarding the prevention of and response to the issue and submit recommendations to the governor and General Assembly by the end of 2023.

What else was introduced this year? What did not pass?

Thousands of bills are filed each year in the General Assembly. For a full list of bills supported and monitored by Missouri KidsFirst in 2022, including summaries and links to the legislation, check out our 2022 Bill Tracker. 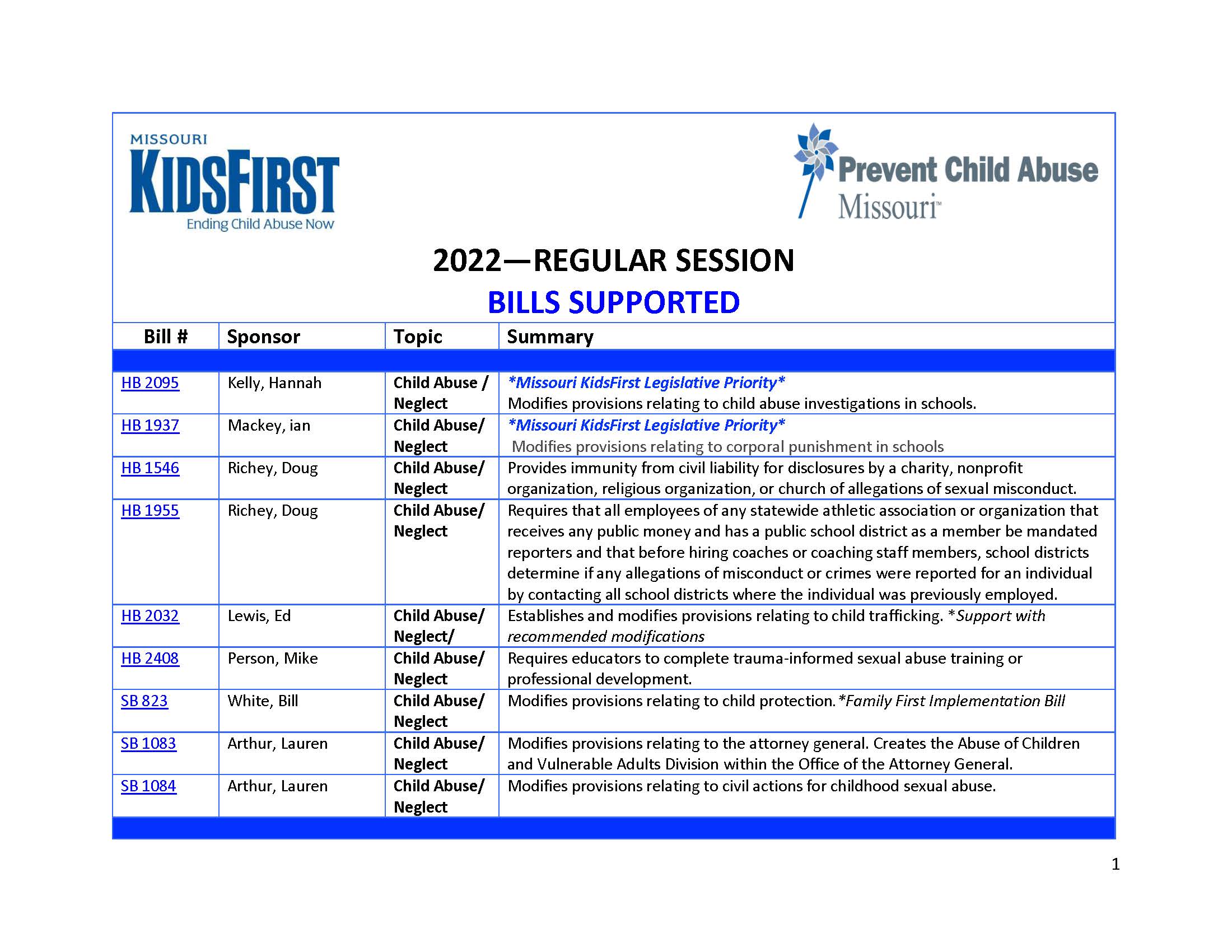